How I Beat Anxiety and Found Peace and Calm 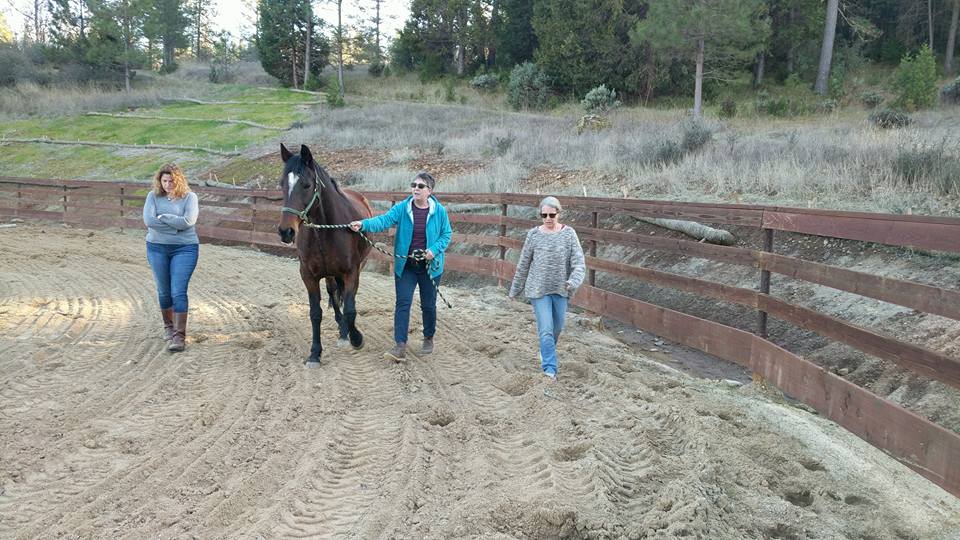 I didn’t know what to expect when I visited Wisdom Ridge Ranch.

I had very little experience with horses in my life. I remember two or three times as a child when I was lifted onto a pony’s back for a turn around a ring at a fair or a brief plodding trail ride – my horse docilely following the horse in front of us.

Amy talked to us about what makes working with horses special. She told us the how the authenticity of interacting with another being without words, and without pretense or judgment, can allow a person to arrive at important insights – fast.

I spent just a few minutes with a horse named Junior over six months ago.

I learned things about myself that made a deep impact and have stayed with me.

We walked up the hill to the ring up on the ridge. Amy explained the exercise each of us would try with one of the horses. She showed us how to use our movements and body language to communicate with a horse, how to tell the horse to move, to change direction, to speed up and to slow down.

She described the exercise and demonstrated it for us.

It looked easy peasy when Amy did it.

Each of us was able to do the exercise, but we each had a unique and individual experience.

When I went into the ring with Junior, I felt unsure at first–not anxious or afraid at all, willing and eager to try, but not confident of success.

Junior right away responded, when I stood in the center of the ring and held out the whip, the end trailing on the ground behind his tail, he started moving around, once, twice, more.

Only, he was trotting, not walking.

I couldn’t figure out how to get him to slow to a walk.

Here was my breakthrough.

I’m the kind of person who follows recipes to the letter. I read the instructions before I do the assignment. I follow directions step by step.

And I’m the kind of person who, when I do that and things aren’t working, I blame myself. If this is happening in front of other people, I feel painfully self-conscious, failing in public.

But when I was in the ring with Junior, and the thing I was doing wasn’t working, even though I thought I was doing what I was supposed to be doing…

Time stopped, the world fell away, I wasn’t aware of Amy and the other women around the ring.

I was just there in the center of the ring with Junior going around and around me, too fast, and I was spinning around watching him, thinking, this isn’t working….

and I remembered Amy telling us about something she calls the “rock back and sigh” and I stopped.

I stopped and stood, and held the whip behind my back. I stopped spinning and just stood, and Junior stopped too.

And he moved into the center, walking toward me. I touched him, felt the warmth and strength in his body.

When I got him moving around the ring, he just trotted and I there I was again, spinning with him, feeling helpless and ineffective, and so I did it again, the “rock back and sigh.”

I stopped, stepped back into the center, and dropped the whip on the ground behind me, and took a deep breath. Junior stopped too and walked toward me, and I said,

And Junior nodded, I swear, he bobbed his head down and up and I laughed, and I heard the women around the ring murmuring and laughing too, and I felt exactly like I just shared a joke with Junior.

What I learned from Junior that day at Wisdom Ridge Ranch:

I can trust my instincts.

I can improvise when things aren’t going according to plan.

I can set my own goal, and find my own way to get there, and it’s okay if that doesn’t look like what somebody else told me the goal should be or how they thought I should reach it.

And, the real breakthrough for me: peace and calm aren’t things that exist somewhere out there, and I don’t have to wait for something to happen or stop happening, or for somebody else to do something, before I can have peace.

Peace is something I already have, calm is inside me and I can have it for myself when I want it.

I could read that in a book, or someone could say that to me, and it wouldn’t have the same impact it did – for me to experience it that day, in the ring with a horse named Junior.