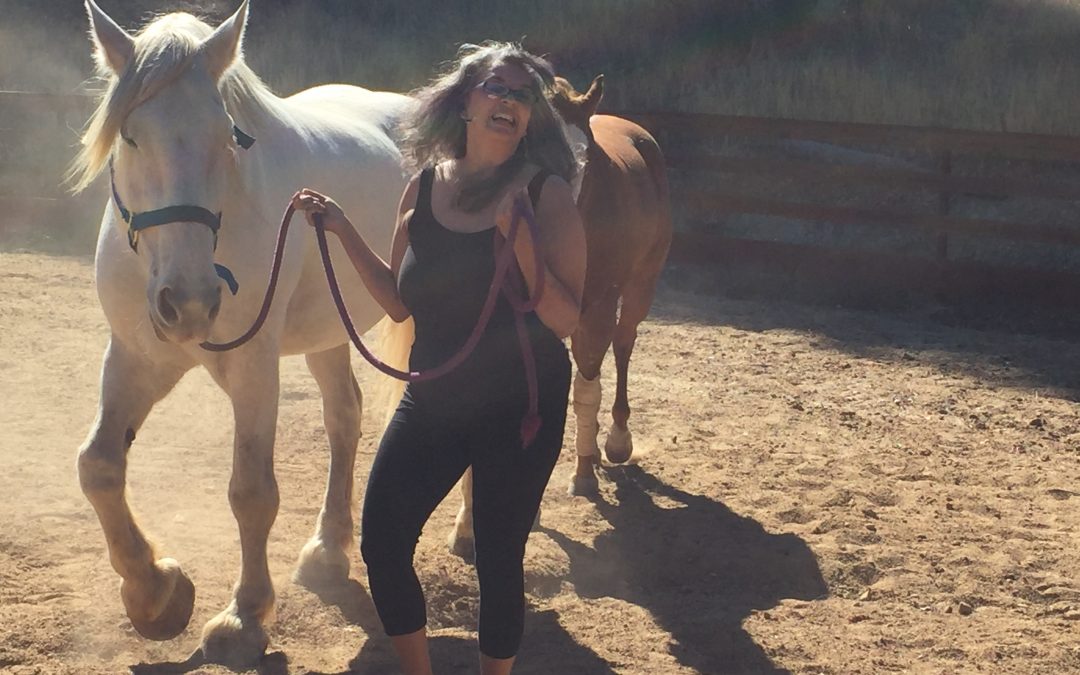 When I woke up on September 27, I had no intention of watching the Kavanaugh hearing.

I just didn’t think my heart could take it.

But I logged on to Facebook and there she was. Christine Blasey Ford. When she spoke, she was pleasing, kind, apologetic, and terrified – describing the assault in detail. If you watch this, and I have more than once, there is no question that she is telling the truth.

And, later that day, as I ran errands in my Ford F350 Super Duty truck, I listened to Brett Kavanaugh filibuster and lie and defend his turf like a rattlesnake ready to strike. Backed by an angry posse of white men just like him. They sounded like they were hissing and spitting all over their mahogany desks.

They wonder why she didn’t tell. And that’s the crux of it all, right? The gaslighting. Who doesn’t tell?

I’ll tell you who doesn’t tell.

The good girl doesn’t tell. The proper girl doesn’t tell. The girl who doesn’t want to defend anymore…who’s already defended herself once by shoving a man from her body, by saying no, please, not this, not me, not now, by fighting his brute force. The defending doesn’t stop…she defends the rest of her life. Defends through the memories she cannot shake. The self-blame. The shame. The running over and over in her head. The girl who spends a lifetime minimizing her own experience to allow men their “hard-earned” career.

The woman who has to put a second front door on her house.

This is why we don’t tell.

Every woman I know raged.

And I felt deep hatred for the white men fearing their own survival so much they refused to believe the obvious. They refused to stand with the truth.

They protected their guy like an 18-year-old frat bro.

Choosing to slam the brakes on justice and hit the trauma gas pedal.

I went outside and sat with the horses.

Dutch came to stand by me. I got up to walk. He walked by my side.

Dutch is a big, powerful horse. He walked with me.

I felt my heart grow.

The tension eased a little bit.

I pulled my claws in.

As I stood there and looked into his dark eyes, smelled the sweet smell of stale hay on his breath, and leaned my forehead against his, I knew what I could do.

I would call it Ford Day. To honor the courage of Christine Blasey Ford.

Here, where the sun was shining bright and the air smelled of pine and cedar and dry horse manure, where we nibbled on cheese, and nuts, and hummus – we bonded. We healed. We used our voice. We listened.

They told me they wanted some things….

We began the day with tea and water and fresh grapes on the patio – talking about how only 7% of communication is verbal and how the other 93% is body language and how, when you know this and experience communication as energetic cues, it changes everything about all interactions – both with others and with yourself.

I showed them why working with horses in self-discovery and healing is so powerful – horses show us how energy is felt by the senses of our bodies before our brain kicks in. They show us how to tap into our intuitive and sensate feelings to determine safety vs. danger and how to engage with others (or not) without uttering a word.

Here, we stepped out of our heads and into horse time. We stepped into our hearts.

We spent the morning with a band of horses, noticing how each horse sets boundaries with the others. We took notice of how each demonstrated power in a unique way. How one horse would set a boundary by bucking and kicking and another through simply standing strong – in Wu-Wei fashion – action that does not involve struggle or excessive effort. 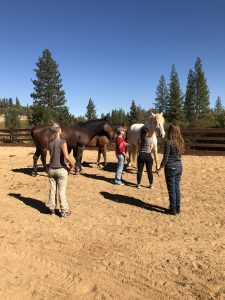 And then we went all-in on BOUNDARIES.

We set up a course of obstacles in the arena and each participant gave each obstacle a boundary name.

And then each woman came up with her own Boundary Declaration. The favorite of the day was

This became our mantra.

I don’t know one woman who doesn’t feel this way.

Then each woman chose a horse – Wisdom or Junior – and led him through the course, with another horse free to interfere or follow (as in life) as the course unfolded and boundaries were conquered.

Then each woman announced her declaration in a walk around the arena. 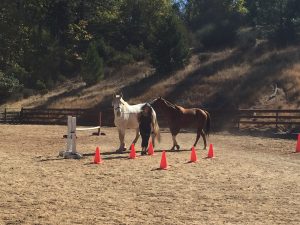 So many life-changing epiphanies…

From Grace: I found it interesting how boundary setting along with owning my truth, which can cause loss, has always had a negative slant for me, hence, I hated doing it. I really loved how you explained both of these concepts, one a few months ago in your FB live, and the other this week, and you gave both a positive slant, making them so much easier to digest. I get it now.

From Carla: I was deeply moved in the boundary exercise when Junior showed me I did not need a boundary with my partner but rather to allow more affection and connection with him when I’m feeling like isolating and going it alone. Especially Junior stepping on the lead rope and insisting on nuzzling and being sweet with me 😉

I was also deeply affirmed to continue with my work supporting women in befriending their bodies by leading Junior through a serpentine course and having Wisdom choose to follow us even though it was a winding indirect way to walk.

From Rachel: Going back over the obstacle that Wisdom initially refused taught me resilience and affirmed that I can always try again. I get to have do-over’s!

After lunch, we went on a short hike to the Ridge with Zinny – a stunning dark reddish bay mare here at Wisdom Ridge.

The participants would now be with Zinny one-on-one in a round pen placed among the shade of ancient oaks. They could each choose to do an assertiveness exercise with Zinny, or, have a session that allowed them to connect with their heart and realize their heart’s desire with Zinny.

One participant got to see how her energy directly impacted Zinny’s ability to listen to her directions to achieve the goal she wanted. She was able to practice shifting her energy to a deliberate, slow pace and watch how Zinny mirrored her energy by slowing down and walking instead of trotting around the pen.

Then, we were all deeply moved by witnessing the powerful breakthrough one participant had with Zinny. This woman saw her beauty reflected back in Zinny (they literally had the same hair color!) and was able to let go of her self-criticism that had been triggered when seeing her weight on a scale at her doctor’s appointment.  She came from her time with Zinny beaming with joy and the beauty radiating from her had us all in tears.

Another woman stepped into the round pen with Zinny and practiced letting go and playing. Zinny matched her play and connected with her – opened her mouth wide and shook her head with fervor, tossing her mane about. This woman had learned in the boundary exercise that she didn’t need the boundaries she put out there with her partner and Zinny further reinforced that it was safe and fun to not have a wall around her.

We closed our day with a hike down to the barns from the Ridge. One woman, who’d needed to release her trauma that day, led Zinny down the hill in a partnership that was simply stunning to watch.

Epiphanies. Transformations. Peace. Community. Power from the inside out. 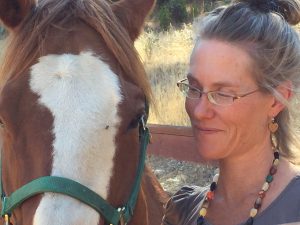 A lifetime of memories. An arsenal of metaphors to face fear. To rise.

Amy Buck, former tech exec turned coach, guide, equine facilitator and a ranch owner with grit translates nature’s life lessons into heart-centered leadership practices. Join her Facebook page for women to get all the latest updates on future Ford Days, programs and tons of free content designed to support, inspire and ignite women to lead life on their own terms. https://www.facebook.com/groups/HeartsDesire/about/

*Names have been changed to protect confidentiality.